According to a letter left on the Facebook page of Friends of Freedom and Roam Uganda (FARUG), the LGBT rights group had its office broken into on Saturday night. All of tis computer equipment and other supplies were destroyed, the phone lines were taken out, and the group's member database was stolen — perhaps the most worrisome detail.

According to the group, the police haven't even bothered to come check the crime scene yet. 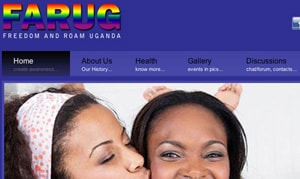 Its with great sadness that I write to inform you that FARUG offices were broken into on Saturday night.5 computers,2 printers,server,microwave and some docs  including the members electronic database were stolen. A jerrican of Acid ,1 computer ,all paddlocks filled with Acid and a huge metallic pipe where left in the compound.The office lines were also taken and thus we shall only be able to be contacted on our personal phones and the office mobile hotline on +256 (0) 771840233

We are however glad that no one was at office at the time of the robbery and thus no physical  human damage was caused. The case was reported to police but no help has been provided as yet,they havent yet even come to check the crime scene. The mood is very low,trauma and worries are filled with members.

Will be sending you more details as the case evolves. We also thank those that have helped thus far,sending words of encouragement and also those that have visited us since saturday.

We also want to inform you that the HATE NO MORE campaign will go on as planned starting with a community meeting this Monday 1st August  2pm at the offices.

There have been reports that Uganda's "kill the gays" bill, which was tabled at the end of the last Parliament, is set to be reintroduced as early as the end of August.