Lt. Dan Choi testified for three hours yesterday in the trial over his arrest at the White House after protesting the military's "Don't Ask, Don't Tell" policy, MetroWeekly reports: 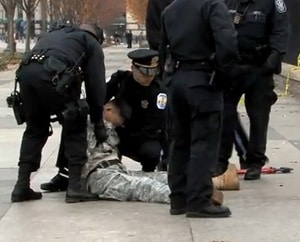 On the stand, Choi said the First Amendment provides for the right of people to petition the government for a redress of grievances, which also, he said, is a moral responsibility of patriotic Americans. Choi responded under questioning by Feldman that he believed his actions were a form of speech, and that the government did not have a right to censor them by arresting him.

At times, Choi raised his voice and spoke in such a tone that he almost seemed close to shouting, especially when asked about his arrest. Under cross-examination by Assistant U.S. Attorney Angela George, he compared the various protests against “Don’t Ask, Don’t Tell” to the 1960 sit-in by students in Greensboro, N.C., at a Woolworth’s department store and said he was “insulted” by his prosecution on federal charges.

“The November 15th arrest is surprising in my mind,” Choi said, comparing the tactics used by police officers to remove him from the fence and transport him to the police wagon to procedures taught to soldiers in war. Choi said his left arm had been twisted and he could not feel his index finger for two weeks afterward, statements he said were reinforced by videos showing his arrest.

"The right to speak on behalf of those who cannot speak for themselves is more than a privilege," said Choi, his voice rising with emotion during a cross-examination that turned confrontational at times. "It's a moral responsibility and I take that seriously."

Choi said he could not recall details of his arrest, but likened the scene to a "combat zone" and recalled being struck by what he considered to be aggressive and demeaning tactics by the U.S. Park Police officers who showed up.

Choi's trial began on Monday. Choi faces 6 months in prison or a $5,000 fine for an obscure infraction of Parks and Wildlife federal regulations. Twelve other activists accepted a plea deal, agreeing to a guilty plea in federal court for which they would serve no jail time if not re-arrested within four months. Choi would not accept the deal.

Previous Post: « Henry Cavill is a Man of Steel: PHOTOS
Next Post: Hats Off to Alber Elbaz and Lanvin: VIDEO »