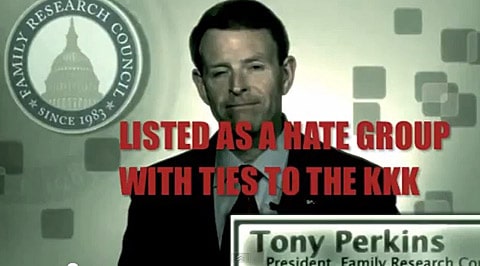 Equality California and its Executive Director Roland Palencia are coming out strong against attempts to overturn California's FAIR Education Act, the law that mandates schools add LGBT history to their curriculum.

In late July, the California Secretary of State gave the Capitol Resource Institute, backed by the Family Research Council, the greenlight to proceed with efforts toward a ballot referendum repealing the measure.

Palencia spoke with Rex Wockner and other journalists this week about EQCA's efforts to stop anti-equality "extremists" from repealing the law.

In a statement and video released yesterday, Palencia goes after the hate group Family Research Council and the lies that it pushes to advance its agenda.

Last week the Family Research Council, a virulent anti-LGBT organization with ties to the Ku Klux Klan and recognized as a hate group by the Southern Poverty Law Center, joined the effort to overturn the FAIR Education Act in California and released a video message to fundamentalist churches on behalf of the campaign. In it, the group's executive director, Tony Perkins, blatantly lied about and grossly misrepresented the FAIR Education Act, which requires California schools to include factual, age-appropriate information about the contributions, social movements and current events of, people with disabilities, Lesbian, Gay, Bisexual and Transgender (LGBT), and Pacific Islander people in already existing social studies lessons.

Said Palencia in a statement:

"California voters have a right to know the truth about those most backing the effort to overturn the FAIR Education Act and that racist and homophobic organizations have no intent to protect families and children but instead hurt them with their bigotry.

Let's be clear: it's the anti-gay, racist rhetoric, dogma and attacks of these organizations that harm children, families and our society, not movements for equality, truth, inclusivity and dignity for all people.

Many fair-minded Californians—especially parents—may not yet know how they feel about the FAIR Education Act. But I don't believe any fair-minded parent would find friends of the KKK a trustworthy protector of their children. It's critical that these groups are exposed for what they really are: fear-mongers who prey on good parents' deep, instinctive desire to protect their children in order to advance a hateful, anti-equality agenda."