GQ has posted a lengthy article in its latest issue (with the Jets' Mark Sanchez on the cover) about the repeal of "Don't Ask, Don't Tell". Chris Heath interviewed dozens of gay servicemembers, from World War II veterans in their late eighties to young servicemen on active duty, on life in the military as a gay man.

Here are a few quotes: 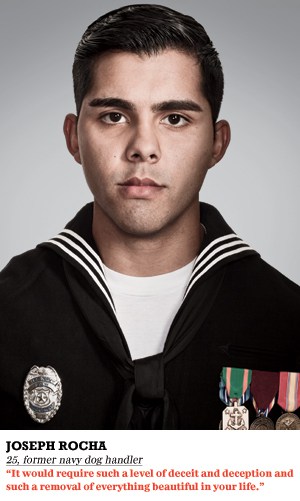 On life today as a gay serviceman:

Marines #2 (captain, nine years): "Part of what has really allowed me to hide in plain sight is the fact that I don't meet the stereotype. And you're good at your job—a gay person wouldn't be good at his job, so obviously you're not gay. You're a Marine, you don't mind getting dirty, going out into the field and not showering for weeks at a time…and, if you were gay, when you have to shower with all these other guys you'd get all excited. You're not getting excited so you're clearly not gay. I mean, if you want to hide, the Marine Corps is one of the best places to do that, because nobody wants to admit they are standing next to a gay guy. Nobody wants to admit that they have gone to war with gay people."

On life seventy years ago as a gay serviceman: World War II:

Jack Strouss, 88: "We had heard about these very frightening psychiatrists who were going to grill you. We thought they were the all-seeing people. So we were a little apprehensive. But it certainly didn't happen that way. I was called in, and there was a man sitting behind this desk, and he pulled down his glasses and looked at me, and the only thing he said to me was 'Do you like girls?' I said, 'Oh yes. And I love to dance.' And he looked over at the door and said, 'Next!' "

Edward Zasadil, 86: "I was not revealing my gayness to anybody. I did have one or two incidents, but no one noticed it. We were in two-man tents, a good-looking fellow from another platoon was bunked with me, and I woke up at night, finding he was playing with my penis. And we did that every night after that. It was taking a chance. But all in all I just kept everything very straight. There were the usual nasty remarks about gay people—'homos' and whatnot. But I passed it off. All my life. Acted as straight as possible. Listen, my life was a pretense the whole time."

* Edward Zasadil didn’t come out until he was 80

On silence or trust:

Marines #2: "I came out to one person when I was in my first unit. Everything was fine, then something came up—I said something job-related that she took offense to personally. And her form of retaliation was to go in and tell my officer in charge that I was gay. It's the easiest thing you can do because there's no defense against that. Thankfully, I had proven myself at that unit and his response was: 'He's a good Marine. I'm not really interested in any of this nonsense…. Mind your own business.' And that was the first, last, and only time that I ever explicitly told another Marine I was gay."

Navy #3 (commander, reserves, twenty years): "A pal of mine on a carrier went to the CO and said, 'What is your policy on gays?' The CO looked at my friend and said, 'If somebody wants to get off my ship for being gay, they have to come to me with two Polaroids, in both of them they have to be clearly sucking c**k, and I want to be able to see their face.' That's why I love my navy."

On the day everything changes:

Marines #1: "When we finally get certification, for me it is no longer controlled information. I don't give a rat's ass who knows. And I'm not going to swallow words rather than saying it. If you say something f**king stupid then I'm going to say: 'Hey, motherf**ker, you're a f**king idiot, shut the f**k up. Because we ain't going to put up with that shit no more.' I mean, I'm ready for that. Right now I'm angry. I've had e-f**king-nough. We've eaten a sh*t sandwich for seventeen years. History is here."

Tell: An Intimate History of Gay Men in the Military [gq]