The National Park Service has found cracking in the top of the Washington Monument during inspections following today's 5.9 earthquake, NBC Washington reports: 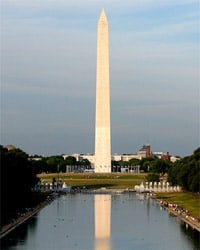 "The cracking in the Monument was discovered during a secondary inspection. Structural engineers will evaluate the cracks Wednesday and determine how to repair them before the Monument is reopened. The grounds have reopened except for an area of about 100 feet outside of the plaza. The Lincoln and Jefferson memorials reopened at about 7:20 p.m…The NPS said it is evaluating the structures to ensure that they are structurally sound and safe for all visitors. Agency spokesman Jeffrey Olson had told the AP that there was 'absolutely no damage' to the Washington Monument, contrary to media reports elsewhere that it was leaning."

Fox News anchor Megyn Kelly reported around 2:30 pm that their bureau received information from a producer that a Captiol Hill Police officer said the Washington Monument may actually be tilting as a result of the earthquake.

Seismologist John Rundle joined Kelly on her show and confirmed that the Washington Monument could very well be tilting as a result of the earthquake and the structure should be checked out.

In related news, cracks may also be found in the legitimacy of this auto shop commercial quake video, which the AP appears to think is real, AFTER THE JUMP…