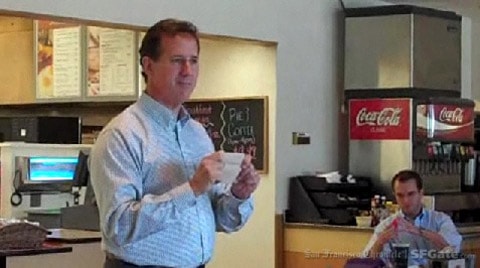 At a campaign stop in Iowa Falls, GOP presidential hopeful Rick Santorum used a napkin to warn Iowans that something that has been legal in their state since April 2009 is somehow going to destroy society.

"Marriage existed before government. This is a napkin. I can call this napkin a paper towel. But it is a napkin. Why? Because it is what it is. Right? You can call it whatever you want, but it doesn't change the character of what it is. From the metaphysical. So people come out and say marriage is something else. A marriage is the marriage of five people. Five, ten, twenty. Marriage can be between fathers and daughters…"

Whatever you call it, a napkin will also always do a decent job at wiping up Santorum.