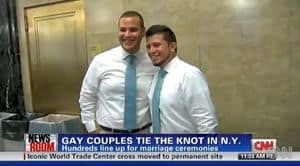 Couples who entered the public lottery to marry on the first day of marriage equality in New York, were automatically entered into a drawing to receive the honeymoon package. An all-time high of 659 marriage licenses were issued in New York on July 24. Couples came from as far and varied as Hawaii, Utah, Texas and Missouri to say ‘I do’ and usher in a new era of acceptance and equality in New York State.

However, the NY Daily News reports, one of those couples, Sacha Jessamy and Sharif Allen, is straight, and a wedding website in their name says they were married on October 24, 2009.

According to the email from Quinn's office, "Newlyweds Tina Johnson and Iris Gonzalez in the Bronx; Rafael Delannoy and Emilio Casarez in Manhattan; Gregory Anderson and Peter Talley in Brooklyn; Sacha Jessamy and Sharif Allen in Queens and Robert Portas and Charles Dominick in Staten Island  were selected to receive the New York City honeymoon package, which includes a two-night stay in a luxury hotel, dinner for two at any Benmarc Restaurant, two tickets to the Broadway musical Hair, and passes to an array of cultural institutions throughout New York City.  All those who were married on Sunday will receive a gift certificate to Macy’s to celebrate their union. "