Today, U.S. District Court Chief Judge James Ware will consider a motion from the American Foundation for Equal Rights to make public a video recording of the trial of California’s Proposition 8. Late last week, the American Foundation for Equal Rights held a press call about today's hearing to unseal the trial recordings, and a hearing on September 6 before the California Supreme Court.

Listen to the press call moderated last week by AFER's Chad Griffin, AFTER THE JUMP… 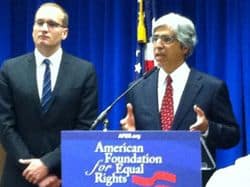 "Monday's hearing is simple. The U.S. Supreme Court has recognized time and again that the American people have a First Amendment and common law right to access court records. This is a case where the public should have maximum access. There is nothing secret about this case. It was open to the public. The public has a right to see the testimony from the trial so they can judge for themselves. There is absolutely no basis for keeping this judicial record secret. The Proponents' harassment allegations are baseless distraction." 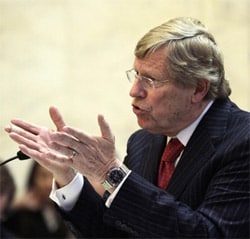 In an editorial on Friday, the NYT urged that the tapes be made public:

The demand to keep the videotapes secret is as flimsy as the arguments for denying gay people the fundamental right to marry. The proposition’s backers will not be hurt in any way if the footage is released. The American public, on the other hand, stands to lose something very valuable if it is denied the chance to see and hear what happened in a critically important case on marriage equality.

A fact sheet about the hearing can be found HERE. Prop 8 Trial Tracker is running a live blog today.

Olson also spoke about the September 6 hearing before the California Supreme Court.

…Our hearing before the California Supreme Court concerns the issue of whether proponents of a ballot proposition have any right to represent the state on appeal when state officials do not do so. There is ample authority that individuals do not have a right to defend a law unless they have suffered a direct and immediate harm. Proponents cannot show harm, they can only say that they wanted Prop 8 to be enacted. We believe that the Proponents do not have the right to appeal after the state officials decided not to. This is about whether Proponents can continue with this litigation. We expect a prompt decision on this issue. Whether or not standing is found to exist, our plaintiffs will win."

Listen to the press call moderated last week by AFER's Chad Griffin, AFTER THE JUMP…