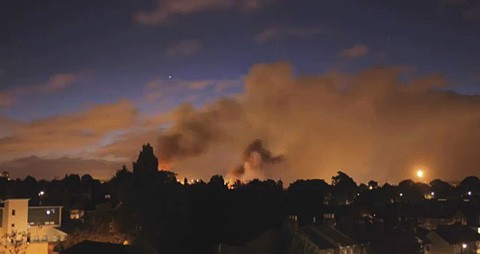 Over the weekend, Andrew posted about the riots in London's Tottenham neighborhood that sprang from a peaceful vigil over the Metropolitan Police's fatal shooting of 29-year old father of four named Mark Duggan.

Now, there's an eerie time-lapse of the event, as the fires burned into early morning.

In related news, Morrissey spoke up about the riots at one of his concerts, criticizing the British government:

"Does anyone think that David Cameron has been to Tottenham? I don't think so," he told the crowd.