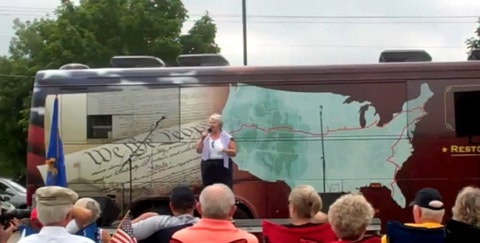 Members of the Wisconsin Tea Party had the 'choot-spa' to cheer the credit downgrade when they heard they were being blamed for it, Mother Jones reports:

Here's what happened: Midway through the Fond du Lac event, Florida talk show host Andrea Shea King took the stage. She told the audience that commentators were describing the downgrade of US debt to AA+ from AAA as the "tea party downgrade," laying the blame squarely on Congress' right-wing faction and its supporters. But rather than boo those who claim the tea party caused the downgrade, the 200 or so Wisconsinites in attendance cheered, sounding almost proud to be blamed for the downgrade.