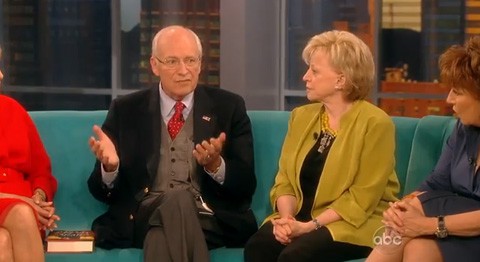 Barbara Walters asked Lynne Cheney what she thinks of gay marriage on The View today.

Nudged Walters, "So, you're not against gay marriage."

"Do you agree with that?" asked Joy Behar of the former Vice President.

"Yes," answered Cheney, dodging a follow-up on whether the issue should be federal law. "I think freedom means freedom for everybody and you ought to have the right to make whatever choice you want to make with respect to your own personal situation.

Cheney has publicly supported marriage equality for more than two years now. In June 2009, at an appearance at the National Press Club, he said that he thought it should be handled on a state-by-state basis.