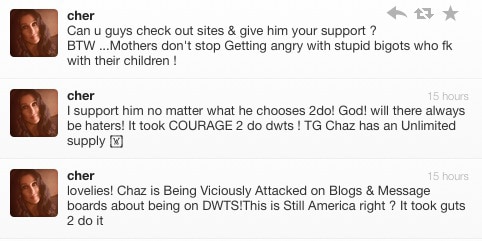 Cher stepped up on Twitter to defend her son Chaz as he was attacked on ABC and other sites for his participation on Dancing with the Stars.

Tweeted Cher: “Chaz is Being Viciously Attacked on Blogs & Message boards about being on DWTS!This is Still America right ? It took guts 2 do it….I support him no matter what he chooses 2do! God! will there always be haters! It took COURAGE 2 do dwts ! TG Chaz has an Unlimited supply."

Chaz has been paired up to dance with Lacey Schwimmer on the show. 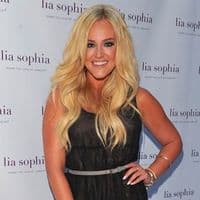 Lacey spoke out about the Chaz 'controversy' yesterday, to The Insider.

"No human is perfect, so why are they pointing out what they perceive to be an imperfection in someone else? It's not cool. We’re all taught to not bully, or harass, and treat everyone as equals yet all these people are doing exactly the opposite…At the end of the day, everyone is going to have a hater. I choose not to listen to it, because it’s ridiculous. To us, it’s more important to focus on the positive people."

She added that she was thrilled to be paired with Chaz:

"I was absolutely thrilled. I’ve always been a huge supporter of the LGBT community and I couldn’t be more excited to have Chaz. Not only is he Sonny & Cher’s child but he’s also a generally cool person…This is my sixth season — the producers know that I’m very open-minded and really accepting of everyone. Ever since Lance [Bass] was on the show, it opened the door for the LGBT community to be accepted in Middle America and it’s about time. It’s 2011, let’s evolve a little bit here."

"We thought about it…We try to follow what happens in real ballroom competitions. That was the original intention of the show. And while we are aware that there are same-sex couples, the competitions are usually mixed-gendered."

Kressley will be partnered with Anna Trebunskaya.

Green also responded to accusations that because of the inclusion of Bono and Kressley the show has a 'homosexual agenda':

DWTS executive producer Conrad Green told The Hollywood Reporter those charges are unfounded, "We don't have an agenda of any sorts. I think of the 120 celebrities we've put on the show, we've had, I think now, three transgender or gay contestants. If that's a homosexual agenda, we're not doing very well at it."

Green explained, "What we try to do is reflect a broad range of the entertainment world in the casting of the show, and we're always trying to find new things that people haven't seen, new types of stories and that's what we've been doing this season."