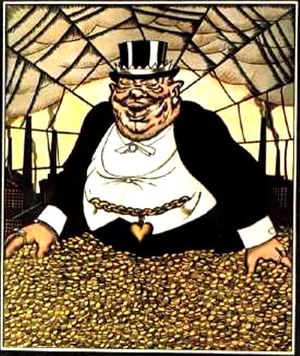 Last week, we saw Stuart Varney (pictured right), a host on the Fox Business Network, declare that poor people "lack the richness of spirit." Now for the latest installment in Republican classism, this one even more egregious and openly evil.

The American Thinker, a far-right online zine, has an article up today on the conspiracy to ensure that poor people are registered to vote. The title says it all: "Registering the Poor to Vote is Un-American." In fact, it's tantamount to being an accessory to crime:

Registering them to vote is like handing out burglary tools to criminals.  It is profoundly antisocial and un-American to empower the nonproductive segments of the population to destroy the country — which is precisely why Barack Obama zealously supports registering welfare recipients to vote.

That's right. America's dreaded "welfare recipients" – you know, the single moms who work two jobs and take out food stamps to keep their kids from starving – are easily manipulated parasites, and any effort to help them exercise their sacred right to vote is "antisocial," bordering on treason.

The American Thinker, by the way, is the same zine that published this blockbuster piece of investigative journalism last week, "Early Obama Letter Confirms Inability to Write," which reads like a particularly nit-picky chapter from a KKK re-release of the Elements of Style. In it, reporter Jack Cashill proves the president's illiteracy by pointing to his failure – not once but twice! – "to make subject and predicate agree" in a letter that he wrote in college decades ago. Nevermind that Obama was the editor of the Harvard Law Review or that he penned two best-selling books without a ghost-writer – Jack Cashill is sure that he's an ungrammatical "neophyte race-hustler" who snuck into the White House via affirmative action.

But there's nothing racist about the right's opposition to Obama! And class warfare is all on the left!

UPDATE: As if to bring this post full circle, Media Matters reports that Matthew Vadum, author of the "poor-people-shouldn't-vote" article, was invited onto the Fox Business Network last night – after his article came out – to discuss the insidiousness of Obama's voter-registration drives. I wonder if someone at the network read his article and said, "Let's get him on the air!" Watch the video.

Previous Post: « U.S. Department of Interior Says “It Gets Better”
Next Post: Fox News: Don’t Let Your Kids Watch ‘Dancing With the Stars’ »