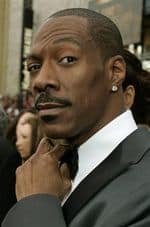 "Eddie is a comedic genius, one of the greatest and most influential live performers ever," said Ratner.  "With his love of movies, history of crafting unforgettable characters and his iconic performances – especially on stage – I know he will bring excitement, spontaneity and tremendous heart to the show Don and I want to produce in February."

Commented Mischer, "Eddie is a truly ground-breaking performer, whose amazingly diverse array of roles has won him a devoted audience of all ages. His quick wit and charisma will serve him very well as Oscar host."

"I am enormously honored to join the great list of past Academy Award hosts from Hope and Carson to Crystal, Martin and Goldberg, among others," said Murphy.  "I'm looking forward to working with Brett and Don on creating a show that is enjoyable for both the fans at home and for the audience at the Kodak Theatre as we all come together to celebrate and recognize the great film contributions and collaborations from the past year."

The ultra-early announcement appears to be geared toward boosting a cinematic return for Murphy, Deadline adds:

This is coming months earlier than normal because usually the Oscars host isn’t chosen or announced until January. But everyone is eager to get out the news now. I do know that Murphy’s Hollywood agency WME thinks it’d be a real coup for Murphy’s dormant career which is about to get a kick-start. That’s because the veteran comedian is starring in the Brett Ratner-directed and Imagine/Universal-produced Tower Heist action laugher with Ben Stiller that opens on November 4th and is receiving great buzz. So Murphy and Ratner already have a close relationship, and this would be a way for Brett to put his personal stamp on 2012′s broadcast. Plus Murphy is starring in the DreamWorks dramedy film A Thousand Words scheduled for release on January 12th.