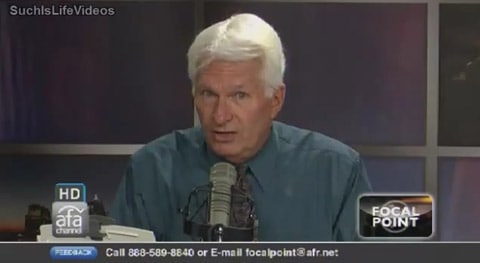 Bryan Fischer is giddy that people paid attention to his rant the other day about recriminalizing homosexuality, and announces he has a bunch of other stuff on his list too, like outlawing unprotected sex.

Fischer then brings up adult film actor Derrick Burts, whose body is "riddled from disease with the choices he's made." Burts wants an ordinance penalizing any gay adult film actor having unprotected sex.

And if someone wants to extend that same penalty to unmarried straights who have sex, who am I to complain?

Fischer also offers a freaky rant about Outserve, the publication that is going to be distributed on military bases after the repeal of "Don't Ask, Don't Tell".