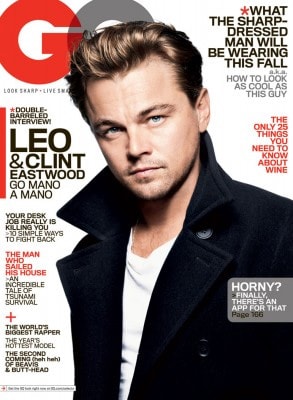 DiCaprio: "That's the most infuriating thing–watching people focus on these things. Meanwhile, there's the onset of global warming and these incredibly scary and menacing things with the future of our economy."

As for the gay element in the film (via USA Today), Eastwood says:

"I'd heard all the various controversies and gossip—that he wore dresses at parties. Everybody was saying, maybe he's gay because he'd never gotten married. But that's the way they did it back in the '40s. If a guy didn't get married, they always thought, Oh, there's something wrong with him….[Associate FBI director Clyde Tolson and he] were inseparable pals. Now, whether he was gay or not is gonna be for the audience to interpret. It could have been just a great love story between two guys. Or it could have been a great love story that was also a sexual story…It's not a movie about two gay guys. It's a movie about how this guy manipulated everybody around him and managed to stay on through nine presidents. I mean, I don't give a crap if he was gay or not.""

"What we're saying is that he definitely had a relationship with Tolson that lasted for nearly fifty years. Neither of them married. They lived close to one another. They worked together every day. They vacationed together. And there was rumored to be more. There are definite insinuations of—well, I'm not going to get into where it goes, but…If I were a betting man, I actually don't know what I would bet [regarding his sexuality]."