It's a different, better day in America. 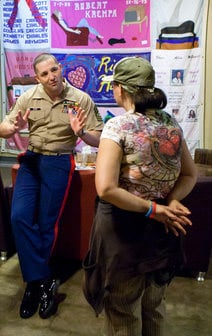 But as it happened, one of the strangest days in the history of the United States Marine Corps unfolded without the protests and insults that Sergeant Henry had feared. Sergeant Henry, who had been invited to set up a recruiting booth on the first day of the end of “don’t ask, don’t tell” at the Dennis R. Neill Equality Center in downtown Tulsa, instead spent it in quiet conversation with a trickle of gay women who came in to ask about joining the Marines.

The Marines, the branch most opposed to ending the gay ban, now appears determined to outdo the other branches of the service in recruiting efforts toward gays and lesbians, the NYT adds:

Still, judging by the traffic at the gay rights center on Tuesday, there will not be an immediate flood of gay and lesbian Marine applicants. By 3 p.m., more than four hours after the Marines had set up their booth opposite the center’s AIDS quilt, only three women had wandered in, none ideal recruits. The local television crews who had come to watch the action — or inaction, as it turned out — easily outnumbered them.

The first potential recruit, First Lt. Misty McConahy of the Oklahoma National Guard, asked if the Marines had openings for any behavioral health officers, her specialty in the guard. She was told no, the Marines use the Navy for medical care. (Later, Sergeant Henry said that he should have sent her to a recruiter for Marine Corps officers, given her rank.)

“It’s a lot of courage for her to come out like that,” Sergeant Henry said, after watching Lieutenant McConahy surrounded by reporters. “Her commander is probably going to see that on TV tonight.”

We'll continue to see stories like this that seem a bit Twilight Zone-ish compared to the last 18 years.