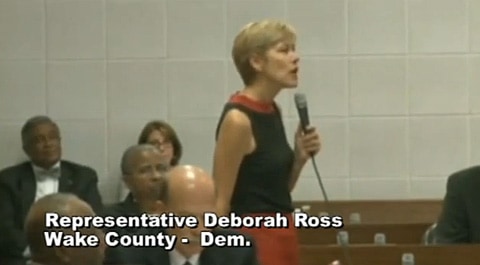 Here's a set of clips via Progressive Pulse of lawmakers speaking out yesterday against the measure that was passed without public debate putting an amendment constitutionally banning same-sex marriage before voters in May 2012. 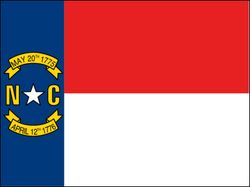 Rep. Paul Luebke scolds lawmakers for not allowing any public debate. Rep. Susan Fisher talks about the marginalization of individuals who want equality. Rep. Ray Rapp says the business community does not like it when culture wars are unleashed.

Rep. Pricey Harrison weeps talking about her lesbian sister – "What kind of signal are we sending her?"

Rep. Rick Glazer says we seek to amend the constitutution because of our fear, and warns of what the amendment will do.

Rep. Diane Parfitt: "How shameful that the day after the tenth annivesary of the tragedy of 9/11 we are even considering an amendment…that takes away rights from our fellow men and women."

Rep. Alma Adams talks about her two marriages and how the bill discriminates. Rep. Larry Hall seems to claim that there are closeted lawmakers in the chamber that won't speak up about it.

Rep, Verla Insko notes the many gay couples in her church and says God accepts them the way they are, adding "Why can't we."

Previous Post: « What Would You Bring to the White House if You Were President?: VIDEO
Next Post: Bishop Walter Righter, Who Opened Doors to Gay Ordination in Episcopal Church, Dies at 87 »