Episcopal Bishop Walter Righter, who opened the door to gay ordination in the Church, died on Sunday at 87 after a long illness. 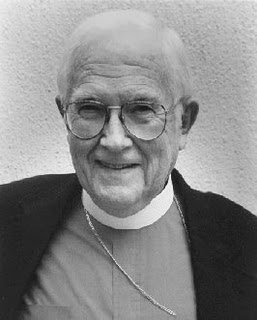 "Raised and ordained a priest in Pittsburgh, he had retired as bishop of Iowa and was assisting in the Newark diocese when he ordained the deacon in 1990. Conservatives in the Episcopal Church charged him with heresy, but the church's highest court ruled in 1996 that gay ordination did not violate core doctrines of the church. The decision eventually led to a split in the Episcopal Church. He returned to this region about eight years ago, and lived in Export with his wife, Nancy."

Bishop Righter was bishop of Iowa from 1972 to 1988, during which time he ordained the first female deacon in Iowa. From 1989 to 1991, he served as assistant bishop in the Diocese of Newark, N.J.

In 1990, Bishop Righter ordained Barry Lee Stopfel, a non-celibate gay man, as a deacon. Ten bishops brought charges against Bishop Righter, alleging that he violated the doctrine of the church and his ordination vows by ordaining Stopfel.

Then came the verdict described above by the Post-Gazette.

A member of the court, Bishop Cabell Tennis, told the New York Times that the verdict offered neither an opinion “on the morality of same-gender relationships” nor guidance on whether a bishop “should or should not” ordain sexually active gays and lesbians.

When asked after the trial to speculate on the future of homosexuality in the church, Bishop Righter told the Times, “I think we’re making too much out of the bedroom.”

Righter is survived by his wife Nancy, a brother, four children and four grandchildren.