If you've visited the Drudge Report this morning, you've noticed the big headline at the top of the right-hand column: "Media Covers Up Obama Speech Flub." It's basically the third-biggest story on the site. 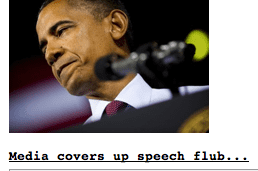 The headline links to a piece at The American Thinker. Remember them? Last week, I highlighted two articles in that far-right rag: one that called Obama an illiterate "race-hustler," and another that claimed "registering the poor to vote is un-American."

And what a scoop they have today! Crack reporter Timothy Birdnow has caught PBS editing an error out of Obama's jobs speech, in which he called Abraham Lincoln the "founder" of the Republican party. (That's technically incorrect debatable: Lincoln joined the party two years after its founding.) That line wasn't in PBS's transcript.

"So PBS has purposely altered a transcript containing a major gaffe by the President," says Birdnow. Time to pull those commies' funding, right?

Birdnow's expose has been linked to by Drudge, Hot Air, Instapundit and other giant conservative blogs. And Fox News has simply reposted the American Thinker story on its website, to the tune of 6k Facebook shares. But I was a little suspicious. So I did some research of my own. It took me about 30 seconds to establish that there's a minor problem: The American Thinker story is completely false.

PBS states that it published the transcript of Obama's prepared, written remarks, as opposed to his actual spoken speech. And Obama improvised the bit about Abraham Lincoln founding the Republican Party; it wasn't in the text of his prepared speech. PBS did nothing wrong.

A few conservative bloggers are catching on to that fact, but, as of this writing, the headline is still there, screaming to the masses on Drudge. I wonder if he'll issue a correction?

UPDATE: Was Obama even wrong to say that Lincoln founded the GOP? Well, not if you believe the GOP's own website. It says this about Lincoln:

Abraham Lincoln helped establish the Republican Party with a speech denouncing an 1854 law, written by a Democrat Senator, that allowed slavery to expand into the western territories. Two years later, he co-founded the Illinois GOP.  Lincoln was runner-up for the 1856 Republican vice presidential nomination and then became a Republican nominee for the U.S. Senate.

(update via Little Green Footballs, which also has a comprehensive list of Republicans who have called Abe the "founder" of their party.)

Previous Post: « Pic of the Day: 2,753 Empty Chairs in NYC’s Bryant Park
Next Post: Catholic Mom is Scared to Leave the House Because of All the Gays »