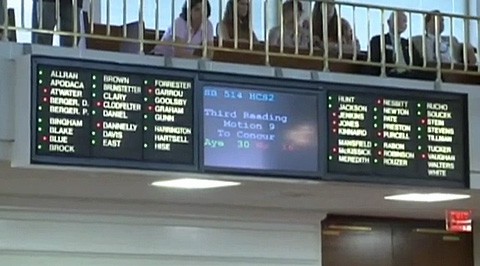 The North Carolina Senate just passed the anti-gay marriage amendment by a vote of 30-16. The measure was passed by the House yesterday.

Opening debate, primary sponsor Sen. James Forrester (R-Gaston) said he was thankful to get the opportunity to hear his bill. “This is the eighth year I put in this bill,” Forrester said. “The bill never had a hearing. I’m very happy to have this bill before us at the time.”

Forrester said the amendment was intended to defend the “an institution in our society based upon the complementary male and female loin.” “Moms and dads are not interchangeable,” Forrester continued. “Two dads don’t make a mom. Two moms don’t make a dad. Children need both a father and a mother.”

The measure will now go before voters in May 2012.

The White House released a statement to the Washington Blade in response to the amendment via spokesman Shin Inouye:

“The President has long believed that gay and lesbian couples deserve the same rights and legal protections as straight couples. That’s why he has called for repeal of the so-called ‘Defense of Marriage Act’ and determined that his Administration would no longer defend the constitutionality of DOMA in the courts. He has also said that the states should determine for themselves how best to uphold the rights of their own citizens…While the President does not weigh in on every single action taken by legislative bodies in our country, the record is clear that the President has long opposed divisive and discriminatory efforts to deny rights and benefits to same sex couples. The President believes strongly in stopping laws designed to take rights away.”