A clean and sober Oscar de la Hoya has come clean about the crossdressing photos that surfaced in 2007 which were the subject of a lawsuit, Gothamist reports: 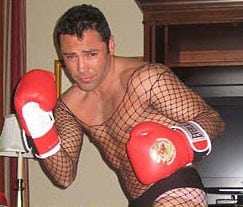 "Let me to tell you, yes, yes, it was me [in those pictures]," he told Aqui y Ahora. "I am tired now of lying, of lying to the public and of lying to myself." The pictures, if you want to remember De La Hoya for something other than his devastating left hook, showed the boxer in bras, fishnet stockings, short skirts and women's underwear.

Also in the photos was a 22-year-old beauty named Milana Dravnel. Shortly after the photos came out, Dravnel sued De La Hoya for allegedly tricking her into signing a statement saying that the photos were altered. According to The New York Post's sources, De La Hoya settled that lawsuit out of court for about $20 million.

De la Hoya blames his adventures in drag on cocaine and alcohol.

Previous Post: « Views from the Top of the New World Trade Center, Plus a Cinematic Supercut of the Old Twin Towers: VIDEO
Next Post: Victim of Brutal Salt Lake Gay Bashing Speaks: VIDEO »