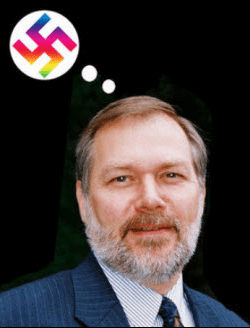 Over in the badlands of World Net Daily, the popular far-right zine, pastor Scott Lively writes that gays are winning the culture wars.

You might know Lively as the lunatic author of The Pink Swastika, which claims the Nazis were a gay front. He was an inspiration for the Ugandan kill-the-gays bills and claimed DADT repeal would produce an army of gay Nazis. Oh, and remember the time he opened a Christian coffeehouse and hired an indescribably creepy registered sex-offender as his assistant? Or the time he assaulted a woman?

I hate linking to his column, but it's worth a gander if only for the fevered imaginings and almost kitschy references to the "homosexual agenda." I'm especially taken by the opening extended metaphor, which equates gays with the conquering armies of Genghis Khan or a marauding cannibal gang from The Road. This guy can write!

The watchman's walls have been broken and breached, the village is in flames, and triumphal "gay" culture warriors are leading a long string of young prisoners by their necks into the woods. Most disturbingly, many of the captives, including some of the children of these still sleepy-eyed Christian parents, seem happy to go. (…)

We need to stand firmly and unapologetically on the hard truth that homosexuality is not a benign, morally neutral social phenomenon. It is an insidious and contagious form of sexual perversion condemned by God as an abomination. (…)

The homosexual agenda represents an existential threat to Christian civilization and we're in the final phase of the war, losing badly. It all hinges upon you, Christian reader. Either get into the "game" in earnest, immediately, or wave goodbye.

Translation: get in the war, Christian reader, or your skull will be thrown on the pile with the rest in the town center.

But seriously, as heartening as it is to hear that, in Lively's haunted little universe, the gays are winning, I can't help but think of the old joke about the Jewish guy keeping his spirits up in Nazi Germany by reading Der Sturmer for all the good news about Jews controlling the world.