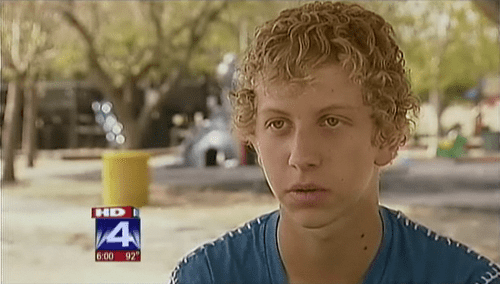 A Texas student has been suspended for telling a friend during a class discussion of homosexuality, "I'm a Christian and, to me, being homosexual is wrong."

Fourteen-year-old Dakota Ary, an honor student and football player, has become an instant cause celebre among conservatives. Liberty Counsel, a right-wing defense firm, helped him clear his permanent record and get the suspension reduced to a day:

Ary's lawyer, Matthew Krause, said the suspension was unjustified and that Ary is entitled to express his opinion on homosexuality in school.

"Just because you walk through the schoolhouse doors does not mean you shed your 1st Amendment rights," Krause said in a statement. "Dakota wasn't disrupting class. He wasn't bullying or harassing anybody. He was just stating his personal opinion on a topic somebody brought up and in a civil and respectful manner." (…)

It all began in Ary's German class, where the teacher was leading the students in a discussion about religion in Germany.

According to a statement from Liberty Counsel, one student asked what Germans thought about homosexuality in relation to religion. Another student asked to hear the German translation of "lesbian."

That's when Ary turned to a friend and said, "I'm a Christian and, to me, being homosexual is wrong," the teenager said in a television interview on Fox News earlier this week.

"It wasn't directed to anyone except my friend who was sitting behind me," he said. "I guess [the teacher] heard me and started to yell about it."

I'd be more inclined to symphatize if the conservatives showed any interest whatever in the endemic homophobia of the American school system and the gay children committing suicide because of bullying.

Nonetheless, I think Ary acted within his First Amendment rights by making a private remark to a nearby classmate in response to an open question about religion and homosexuality. And the teacher could have handled it the right way by addressing the remark calmly, and using it to start up a civil discussion. Merely suppressing an opinion does no one any good – it certainly doesn't change minds.

Did he deserve a suspension at all? Or am I all wrong?