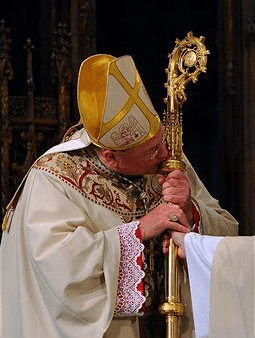 Timothy Dolan, the archibishop of New York and the ultimate Catholic authority in America (seen right kissing a sceptre), has called gay marriage "Orwellian" – which, come to think of it, is a rather Orwellian use of the word Orwellian. Gay marriage is something you'd see in North Korea, he says, and it's just like marrying your own mother. And the twist in his panties is now tightening and violently riding up. This week he dispatched an angry letter to the president:

The nation's top Catholic bishop issued a stern challenge to the Obama administration's decision not to support a federal ban on gay marriage, and warned the president that his policies could "precipitate a national conflict between church and state of enormous proportions.

In a letter sent Tuesday, Archbishop Timothy Dolan of New York, who heads the U.S. Conference of Catholic Bishops, said he and other prelates have grown increasingly concerned since the administration announced last February that it would no longer defend the 1996 Defense of Marriage Act in court.

I'm not sure what he means by "a conflict between church and state of enormous proportions." It sounds like a big, vague threat. Yet somehow I find myself unafraid of a bunch of men dressed like Queen Amidala.

Here's the full text of his letter. (Note: it's a PDF download.)