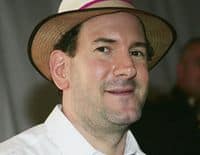 The Drudge Report has finally pulled a headline announcing, matter-of-factly, to millions of readers, that PBS covered up an "error" in Obama's jobs speech by altering the transcript.

As I noted earlier, the story is bogus; there was no PBS conspiracy. Plus, Obama's alleged error – calling Abe Lincoln the founder of the Republican Party – has been repeated verbatim by about a dozen prominent Republicans. And the website Drudge linked to is borderline-racist.

No matter. Matt Drudge, the most powerful gay Republican in the world, who I like to describe as Goebbels in a panama hat, has done his job. He got his derranged followers in a tizzy, and then pulled the link without going through the indignity of issuing a correction or explanation. For him, it's just another day's work.

Oh, and Fox News is still linking to it.

Previous Post: « Catholic Mom is Scared to Leave the House Because of All the Gays
Next Post: 9/11: Before the Bulletins and the First Breaking News »