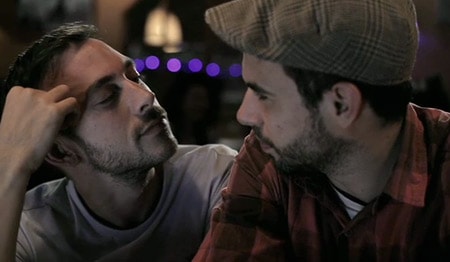 INTERVIEW
Earlier this week I sat down with the writer/director Andrew Haigh, at a West Village coffee shop to discuss his glowingly reviewed debut WEEKEND which opens in limited release tomorrow.  I'd been privileged to see the film early while serving as a jury member at the Nashville International Film Festival this spring, shortly after it had surprised at the SXSW Festival where it won the Audience Award. We followed suit in Nashville and handed it our Best Film prize.

Cut to: Months and months later where I made the enjoyable mistake of putting the screener in for a quick refresher before talking to the director. My intention was to just watch two or three scenes but the compulsively watchable romantic drama sucks you right in and I was nearly late for the interview. Weekend clocks a one night stand between nearly-closeted lifeguard Russell (Tom Cullen, above right) and artist Glen (Chris New, above left) who meet at a nightclub. To their mutual surprise, the one night stand spills over into the next day…and the day after that? It's an unusually honest, beautifully acted little gem, easily one of the best films of 2011 and one of the best gay films in many years. 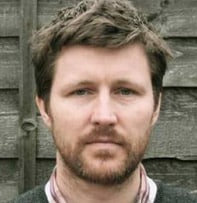 How did you cast this? No matter how strong your screenplay is, romantic dramas they fall apart without the right pairing of actors.

Andrew Haigh: [Pictured left] Absolutely. I was so terrified about it. We didn't have time or money to do a massive casting. I'd seen quite a lot, something like fifty people, and I was starting to get depressed. There were some great people but I just knew they weren't going to be right. And then Tom came in.

Tom's performance surprised me. Sometimes when people are playing introverted characters, it's a bit dull. That's not the case here.

He's got such an expressive face, I think.  He goes from looking quite tough to looking really vulnerable, from really young and sweet to quite old with the weight of life crushing him. Tom thinks he gave an awful audition!

I have to know which scene.

[The director indicates a lengthy conversation on a sofa where Tom tells Glen about the unusual circumstances of his childhood before they have sex a second time.]

That was the scene I gave them but then I took the script away. Do a version of that. Sometimes actors prepare so well that it's hard to see what they're really like. I wanted to get a sense of the real person. Tom was great. Then I put him and Chris together. Chris is not like Glen but he's got an aggressiveness to him. It's sweet but he likes to push people continually to open up. I put them together and there was a chemistry between them, a spark of something. You could just tell they seemed to like each other and worked off each other's style.

The movie is bit explicit. Did the actors know to what extent before auditioning?

They knew from their agents that there was going to be sexually explicit material. You can't ask them if they're gay or straight, you know, in the audition. I just asked them how they felt about gay material. During rehearsals I talked a lot about it. I didn't want them to do anything they didn't want to do – that would have come across.  It was just about developing the trust, I suppose.

Since you can't ask actors about that…

It's all been outed now anyway.

Are they both gay then?

No, Tom isn't. He plays Russell. Chris is. It was hard because Tom didn't want to talk about it. It's not an issue to him. He thought that people would think differently about him if they found out he wasn't gay. And people do think differently. Everyone is always very interested. Is he gay? And then when they find out he's not it's like wow, it's amazing he managed to play gay! [Pause] Welllll, it's not really that difficult to play gay.

That makes me crazy that whole 'They're so brave!' thing. But you as the writer/director… surely you had some preconceived notions. Did you want gay actors? 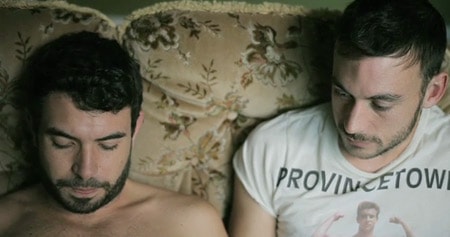 Andrew Haigh: In my head I would have preferred it to be gay actors at that point. Just like everyone else I'm frustrated that there are obviously a lot of gay actors out there and for some reason not many of them play gay roles. I kind of thought Tom wasn't gay during the audition but there was something about him that just was Russell to me. And it's interesting. A lot of the straight people that auditioned they would find other aspects of the character and really work on those in the audition and that's what's important. Sometimes some of the actors who were gay played on the gay to such an extent that it ended up being a cliched gay performance. I can't understand why that was the case.

Nathaniel Rogers: You'd think it would be the opposite.

You would think so. The straight actors were so determined not to play it as a cliche that it kind of worked.

The auditions were improv. That's how the whole movie feels to an extent.

No. it's pretty much scripted. If you spoke to me and Tom and Chris we'd all have a different idea about how much is scripted. I was never adamant that it had to be word perfect. There were certainly moments when they would add things and it would go off the page. There were certain lines that I know that Chris, especially, added in. 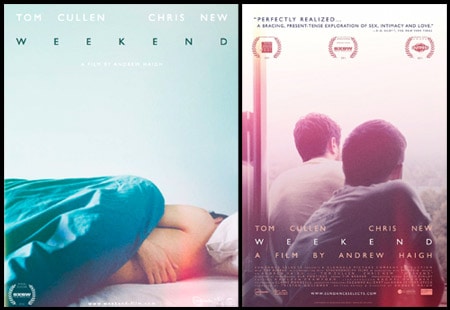 Your new ad campaign, the Quinnford and Scout photographs. They're beautiful and I was so surprised because it reflects the film so well and sometimes advertising is, you know…

We were quite cunning. I'm friends with the photographers anyway so i knew i wanted them to do the stills.

Am I crazy… I thought I saw them in the movie.

They are in it! In the swimming pool. I told them 'do the stills as you would do your own photography of your own relationship'. That's all the stills we gave the marketing people so we kind of knew we were creating some kind of control. And also a friend of mind is a poster designer so he designed posters before the festivals.

I noticed it switched. First you had the poster of Russell & Glen in bed.

They've gone for the less gay ones which I kind of understand. I suppose you've got to be realistic about how marketing works.

But your first success was not at a gay festival so there's obviously crossover appeal. SXSW was the premiere and you won! How exciting was that experience?

To be honest it was terrifying. They don't play gay themed films ever really. It's not part of the festival makeup. We got there and we were playing against Source Code with Jake Gyllenhaal and our screening — the theater probably had 200 seats and there were 40 people in there — and we were like 'okay'…. It was the first time. I didn't think anyone was going to like it. You're so full of terror. The great thing in that screening was that distributors were there. They couldn't buy Source Code which was already sold so they all came to the screening which was perfect. It went really well. "Buzz" — whatever the hell that means — developed from that screening. Buzz is weird. It can develop from like two people. Two days later you saw in The Hollywood Reporter that Weekend was "one of the buzz films"  We were like how did that happen?

Um… because the movie is VERY GOOD.

[Modestly] … I don't know. It's hard for me. I literally edited this film in my bedroom while my boyfriend was watching telly. When I see it in the cinema i still remember it being from my computer. What's happened is more than I could ever imagine.

In your screenplay there's this great scene where Russell and Glen talk about being a "blank canvas" when you first sleep with someone. Did you think about that in terms of your career? This is your first proper narrative feature. It will always be the first impression.

I did think about that. Partly the film is about defining yourself as a constant process which changes. You come out and suddenly "I'm gay!" and that's how you define yourself for awhile. Quite quickly that becomes boring and you find new ways. It's the same for me in making this film.  I don't want to be pigeonholed as the gay director that made that gay film. If my next film isn't gay, people will be like  'Oh, Do you know what? He should've stuck to that gay!' But if I make another film about gay people, it will be like 'Obviously all he can do is gay!' I'm going to have to learn how to deal with it. In the end, i just have to do what interests me and hope.

I kind of don't want to make another film; it's too difficult! [Laughs]

Is sexuality something you'd like to continue exploring in films?

It isn't even about sexuality. What it is about is trying to be honest. I'm writing a script at the moment about two old people in their seventies.  Films about old people are lit in beautiful ways so they don't look like old people anymore. Sex in films is not like real sex. So It's about trying to be realistic about those things instead of just turning them into movies. I think in the end people respond. People want to see their lives onscreen. 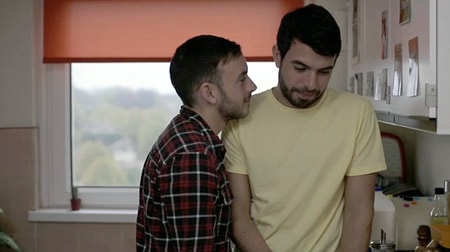 A film like this has a lot of festival premieres and special screenings. What's your favorite and least favorite thing that's happened at a Q&A?

I had one person who was quite angry with me that i cast someone who wasn't gay. He was furious. 'I'm gay! I'm an actor! [Responding] 'You didn't audition and I don't know how good you are as an actor.'

The nicest thing was a woman who had come with her son. 'I've never seen a gay film before and it was amazing. It's made me see my son's life in a different way.' Really sweet. I got choked up.

My mother would not like it. [Laughter]  She can't even handle swearing in movies.

My mom liked it! [Laughter] I was quite nervous. She got emotional — cried even before it started. My dad hasn't seen it yet, so i'm waiting to see what he thinks.

Aren't you worried they'll think it's autobiographical, what with all the sexual details?

I'm sure they probably do think that – they must think that! I try as much as I can to disassociate myself from the film when I show it to people and my family and everything. We're showing it at the London Film Festival and my mom has basically invited the whole extended family: aunties, uncles, cousins, my great auntie who is 90… Oh my god. [Laughter]

So during the Q&A you're going to be like "THIS IS NOT AUTOBIOGRAPHICAL!!!"

'It's nothing to do with me. i'm actually straight now! I told you I was gay but I'm not. I'm straight. It's about some friends of mine!'  [Laughter] 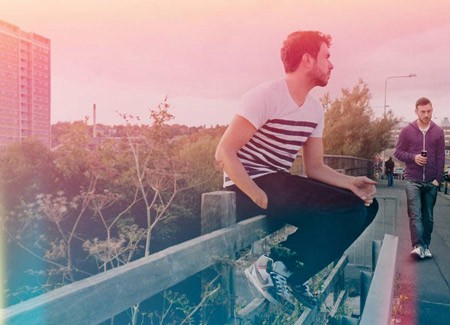 WEEKEND opens Friday September 23rd in limited release. The director will be present at several screenings at the IFC Center in New York this weekend. Check your local listings or keep up to date as it adds cities on the movie's Facebook page.