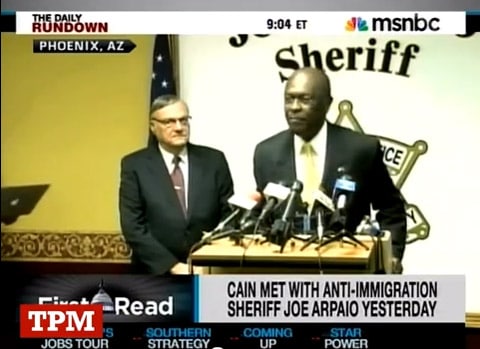 At two different rallies in Tennessee over the weekend, Herman Cain discussed immigration and proposed an electrified fence on the U.S. border with Mexico, a proposal he later said was a joke.

Yesterday in Arizona, Cain met with anti-immigrant Maricopa County Sheriff Joe Arpaio (whose endorsement Michele Bachmann fished for in September), and talked about the electrified fence remarks, which he again said were a joke.

Halfway through the question about the electric fence, Cain butted in with "it was a joke!"

Only, it might not be a joke, he later said, before finally saying he just doesn't want to offend anyone.

"I don't like to offend anyone…however, I don't apologize for using a combination of a fence. And it might be electrified — I'm not walking away from that," Cain backtracked. "I just don't want to offend anybody. It was a joke to the extent in the context of the views of that speech, but in terms of what we need to do, I fully intend to do so because I'm more sensitive to our citizens being hurt."

Watch Cain's remarks, AFTER THE JUMP…