Herman Cain has been hit by charges that he sexually harassed two women while head of the National Restaurant Association in the 1990s, and paid them off with packages “in the five-figure range.” 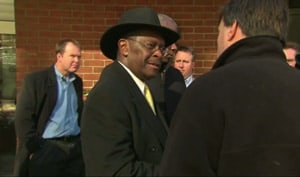 Cain was confronted about the charges on the street by a Politico reporter outside of CBS News:

Cain said he has “had thousands of people working for me” at different businesses over the years and could not comment “until I see some facts or some concrete evidence.” His campaign staff was given the name of one woman who complained last week, and it was repeated to Cain on Sunday. He responded, “I am not going to comment on that.”

He was then asked, “Have you ever been accused, sir, in your life of harassment by a woman?”

He breathed audibly, glared at the reporter and stayed silent for several seconds. After the question was repeated three times, he responded by asking the reporter, “Have you ever been accused of sexual harassment?”

Spokesman J.D. Gordon said Cain denies the charges in a written statement to the AP: “Inside-the-Beltway media have begun to launch unsubstantiated personal attacks on Cain. Dredging up thinly sourced allegations stemming from Mr. Cain’s tenure as the chief executive officer at the National Restaurant Association in the 1990s, political trade press are now casting aspersions on his character and spreading rumors that never stood up to the facts.”