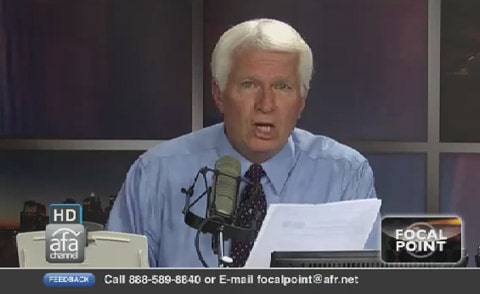 The AFA's spokeshater Bryan Fischer does not want New Hampshire's same-sex marriage law repealed because it will lead to incest and all kinds of other horrible things.

Warns Fischer: "All of a sudden we've got Muslim polygamy on full display."

Jeremy Hooper writes that Fischer is confused: "Bryan Fischer doesn't seem to realize that the clumsy New Hampshire repeal bill is HIS SIDE'S effort, not ours. The bill to which Bryan is referring is the same one being championed by the National Organization For Marriage, Cornerstone Policy, Focus on the Family, Family Research Council, and all of the other groups that misuse the words 'traditional' and 'values,' even while some of them fully admit that the flawed legislation would create separate classes of citizens."