Blogger John Shore posts an email from he received from a pastor who says that his church rejected him after he linked to an article from his Facebook page which discussed the repeal of 'Don't Ask, Don't Tell'. The pastor (whose name is withheld because the church is threatening to withhold his severance package if he discusses the incident) "felt like it was good to celebrate the end of discrimination." 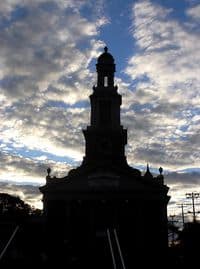 Over the next few hours, several people from my church started commenting on my wall: “How can a Christian be pro-homosexuality?” “Why is a pastor actively promoting the gay-lifestyle?” and so on. Even more people were calling/texting/emailing our lead pastor and the chair of our elder board.

What resulted over the next six days was not fun. The chair of the elder board called for an emergency board meeting to deal with me. I was summoned to the board meeting, where I was forced to give my stance on homosexuality (even though the church has no official stance on the matter, and has never before talked about the issue). And even though I reminded them that we all agree on our church’s statement of faith, ultimately, when they learned that I don’t view homosexuality as a sin, and that I would be in favor of two gay people being allowed to get married, they came to the conclusion that I was unfit to be a pastor at [Name of Church]. And within a week of posting the article on FB page, I was fired from a church I’d served faithfully and helped to build for five years.

Much more at John Shore's site.