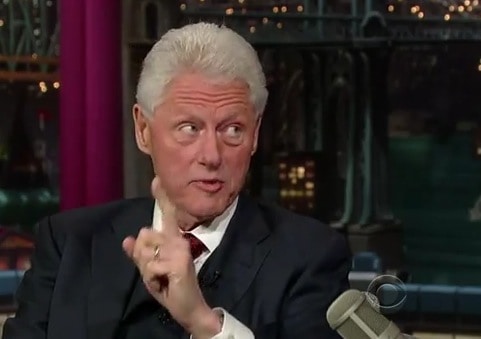 Bill Clinton appeared on last night's Late Show with David Letterman. He talked about his vegan diet, the Tea Party, activist demonstrations, his hair, China and the deficit, taxes, and the Clinton Global Initiative.

“I think that, on balance, this can be a positive thing, but they’re going to have to kind of transfer their energies at some point to making some specific suggestions or bringing in people who know more to try to put the country back to work. Because I don't think that many Americans resent the success of people who make a lot of money fairly earned. I think what bothers people is the country has gotten so much more unequal under the last, over the last 30 years, and now that we’re in this fix, an enormous number of people have been out of work for more than six months, some of whom can’t get interviews because they’ve been out of work for more than six months, who always worked hard, always paid their taxes, did everything they were supposed to do, and made no contributions to the financial meltdown that caused their current distress. I think that is the heart of what they’re saying on Wall Street.”

And Lady Gaga's upcoming performance at  celebration of his 20th anniversary of being in office: "She is the most talented person, even if you're an old fogey like me…In deference to my diet, she'll be meatless that night."

Watch (Clinton starts about halfway through the first clip), AFTER THE JUMP…