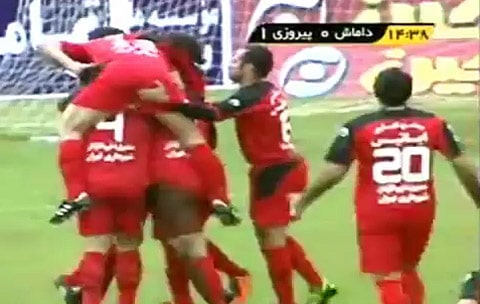 Two Iranian footballers have been suspended for an "immoral" butt grab celebration following a goal that spurred the team to a 3-2 victory, the AP reports:

The report Monday says Mohammed Nosrati, a defender for Persepolis, squeezed the backside of teammate Sheis Rezaei while the Tehran team's players celebrated a goal against Damash Gilan.

Millions across the Islamic Republic were watching:

Nosrati and Rezaei say they did not intend to offend anybody. Iran TV said they were indefinitely banned from entering any stadium and could face even more sanctions.