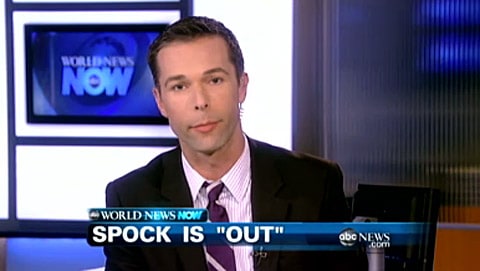 Kind of a big moment for me while filling in on World News Now, which is by far the most fun you can legally have at 3:00 in the morning! Yunji de Nies and I were talking about celebrity headlines, when I read the story about Zachary Quinto, who played Spock in “Star Trek,” coming out as gay in a magazine interview. Because WNN is a show where you can offer some personality, I had a little fun with the story saying that I would drop my rule against dating actors.

I’ve never shared that I’m gay on-air, even though I’ve been out to my family, friends and co-workers for years. In fact, an old boyfriend – now best friend – has always given me a hard time about not doing so. But for the same reason that Zach decided to come out, I too, no longer wanted to hide this part of my life.