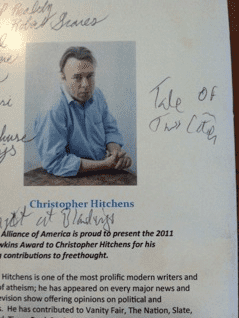 Mason Crumpacker is a ridiculously smart 9-year-old girl who became moderately famous this month after chancing into a conversation with Christopher Hitchens at a get-together of freethinkers in Houston, TX. Hitch was there to receive the Dawkins Award, and after a brief speech took a moment to answer questions, even though a Q&A wasn't part of the program. Mason, then eight, left her mum's side to wander through the thousand-strong crowd in search of the emcee. She seized his mic, and asked the ailing eminence:

What books should I read?

Hitchens seemed charmed, and asked to speak with the girl after the presentation. There, at a table surrounded by Hitchfans, the two spoke for a quarter of an hour. (You can read the Hitchensian reading list AFTER THE JUMP.)

No one's really explained why the encounter's so lit up the blogosphere. It probably has something to do with Hitchens' health, and something to do with seeing such a typically prickly personage instantly tenderize when confronted with a child. But it also has to do with Mason's precocity, which was evident to everybody gathered around that table in Houston.

So evident was it that the Dallas News this week dispatched a reporter to interview the girl. Her responses are mindblowing. She's nine!

Dallas News: Why did you decide to go to an atheist convention?

Mason: I thought it would be interesting to meet different freethinkers and see what they thought about the world. I just wanted to boost my intellectual curiosity.

If someone invited you to a Christian convention, or a Buddhist convention or Hari Krishna convention, would you go?

Probably. I’d like to experiment with different religions. I just like to see what they believe and see if they make sense or not.

What do you think is the role of religion in people’s understanding of right versus wrong?

Religion is a way to get their children to behave. The world is kind of scary without religion, for them because they don’t know what is going to happen.

How does a religion have to “make sense”?

If someone questions [a religious belief] and just says, how do you know this is right? The priest says: Well, it’s in the Bible, isn’t it? Everything revolves around the Bible. Some people believe that if the Bible says it, it’s true, completely true. If I do decide to believe in something, they should have further proof.

Why did you decide it was important to ask a question of Hitchens?

Because I had just found out that he was dying, and he’s a brilliant man. And I felt that his knowledge of the world shouldn’t be wasted, and that someone should continue what he started.

Where will he go when he dies?

Did he answer you the way you expected to be answered?

Yes. He was very honest to me and very, very nice. I think all adults should be honest to kids with their answers and take them seriously. They’re living people, too. I especially hate when adults dumb it down for me.

You can read the whole exchange at Why Evolution's True. (At the Dallas News it's behind a pay wall.) And you can see the Hitchensian reading list below …

Greek and Roman myths, "particularly those compiled by Robert Graves"