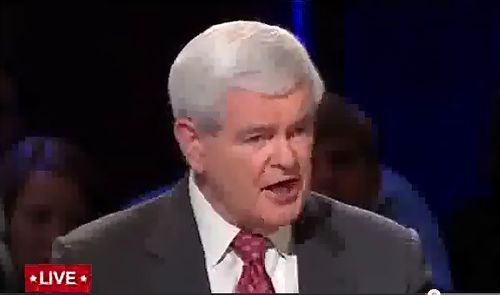 At last night's debate, Newt Gingrich went after Ben Bernanke and Timothy Geithner, and said Barney Frank and Chris Dodd should go to jail for the financial crisis.

"…in Chris Dodd's case, go back and look at the countryside (sic) deals.  In Barney Frank's case, go back and look at the lobbyists he was close to at — at Freddie Mac.  All I'm saying is… Everybody — everybody in the media who wants to go after the business community ought to start by going after the politicians who have been at the heart of the sickness which is weakening this country and ought to start with Bernanke, who has still not been exposed for the hundreds of billions of dollars. (APPLAUSE) And I'm going to say one last thing.  I want to repeat this. Bernanke has in secret spent hundreds of billions of dollars bailing out one group and not bailing out another group.  I don't see anybody in the news media demanding the kind of transparency at the Fed that you would demand of every other aspect of the federal government.  And I think it is corrupt and it is wrong for one man to have that kind of secret power."

Previous Post: « Rosie O’Donnell Talks About Returning to Talk on ‘Nightline’: VIDEO
Next Post: A College Rugby Player Comes Out to His Team: VIDEO »