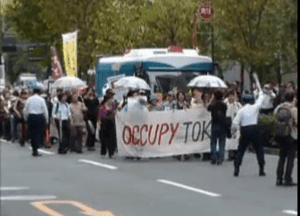 Today's maybe the biggest day yet for Occupy Wall Street, with events breaking out in 87 countries, including Andorra, Luxembourg, Iceland, and Senegal. Senegal!

According to CNN, the protestors' demands are typically, hearteningly anarchic. In South Korea, a protestor expressed solidarity with the Occupy Wall Street Movement, claimed to have no particular beef with the leadership in Seoul, and suggested his demonstration seeks redress for "economic problems worldwide." In Indonesia, an honest-to-goodness Communist named Rudi Daman declaimed a harsher message at a protest outside the American embassy in Jakarta:

We wanted to show that the American regime, its system of imperialism needs to be destroyed.

Happily, most protestors, even on the other side of the globe, seem to have tenderer feelings towards the United States. And despite the world's grim economic situation, seemingly inevitable slide towards geopolitical instability, and generally frowny outlook on just about everything … doesn't there seem to be something kind of giddy about these protests? Something … jubilant? Hopeful, even? Lookit all those smiles breaking out at Occupy Tokyo, AFTER THE JUMP…