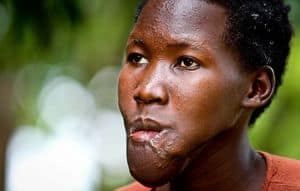 Yesterday, the United States quietly commenced hostilities in yet another unlucky country, bringing the total up to — what? Five? But this one's probably worth it. Barack Obama's committed no more than 100 "advisers" — who are nevertheless combat-ready — to helping the Ugandan government rid the country of the child-raping, body-mutilating, mass-murdering theocrats known as the Lord's Resistance Army, and especially its leader, Joseph Kony.

Kony is a spirit-channeling madman who enslaves prepubescent children. Say what you will about the Ugandan government's oft-ugly treatment of gay people: Kony's worse. During the long civil war he's waged in Uganda, Kony's MO has been something like this: Roll into town, kill a bunch of mothers and fathers, kidnap the kids, keep the girls prisoner and train the boys to fight. His army — which numbers, at this point, less than 4,000 — is comprised primarily of bonded children. (The photo at right is of a young woman named Nancy Abwot, one of the Lord's Resistance Army's child abductees. She received her injuries during an escape attempt. The image is courtesy Echwalu Photography.)

It's hard to say exactly what species of craziness animates Joseph Kony, if only because he does a convincing impersonation of Christian mania at one moment and then, without batting an eye, claims to be Muslim. Maybe he's just a megalomaniac. Maybe he loves sex slaves and cash. Who knows? What's more, who cares? The dude's going down. (Unless he's hiding in Khartoum, which seems possible.)

Here's a bit of Rush's radio show from yesterday, as transcribed at Little Green Footballs: 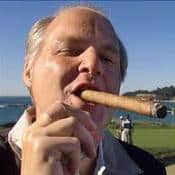 [The] Lord’s Resistance Army are Christians. They are fighting the Muslims in Sudan. And Obama has sent troops, United States troops to remove them from the battlefield, which means kill them. That’s what the lingo means, “to help regional forces remove from the battlefield,” meaning capture or kill.

So that’s a new war, a hundred troops to wipe out Christians in Sudan, Uganda, and — (interruption) no, I’m not kidding. Jacob Tapper just reported it. Now, are we gonna help the Egyptians wipe out the Christians? Wouldn’t you say that we are? I mean the Coptic Christians are being wiped out, but it wasn’t just Obama that supported that. The conservative intelligentsia thought it was an outbreak of democracy. Now they’ve done a 180 on that, but they forgot that they supported it in the first place. Now they’re criticizing it.

Lord’s Resistance Army objectives. I have them here. “To remove dictatorship and stop the oppression of our people.” Now, again Lord’s Resistance Army is who Obama sent troops to help nations wipe out. The objectives of the Lord’s Resistance Army, what they’re trying to accomplish with their military action in these countries is the following: “To remove dictatorship and stop the oppression of our people; to fight for the immediate restoration of the competitive multiparty democracy in Uganda; to see an end to gross violation of human rights and dignity of Ugandans; to ensure the restoration of peace and security in Uganda, to ensure unity, sovereignty, and economic prosperity beneficial to all Ugandans, and to bring to an end the repressive policy of deliberate marginalization of groups of people who may not agree with the LRA ideology.” Those are the objectives of the group that we are fighting, or who are being fought and we are joining in the effort to remove them from the battlefield.

Note that Rush kind of bungled the allegiences of the Lord's Resistance Army in Sudan. No matter. Facts are for wimps.

Check out a very moving trailer for a film called Children of War, about Mr. Kony's child soldiers, AFTER THE JUMP…