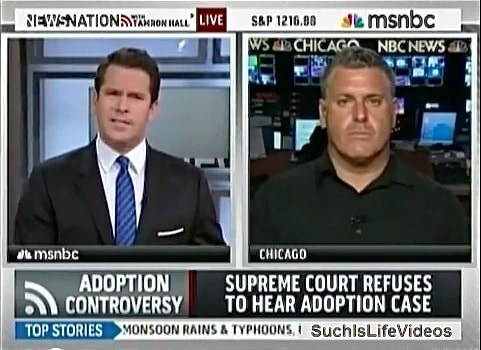 MSNBC's Thomas Roberts spoke with Oren Adar today, whose case was declined this week by the Supreme Court.

As you may recall, in February 2010, a federal appeals court upheld a December 2008 ruling by U.S. District Court judge Jay Zainey ordering the state of Louisiana to list both names of adopted gay parents, Oren Adar and Mickey Ray Smith, on their son's birth certificate. Their son was born in Louisiana but they adopted him in New York. The couple now lives in Orlando, and their case was overturned in April. In July, Lambda Legal asked the Supreme Court to take on the case. This week, they declined.

Our legal expert Ari Ezra Waldman wrote about the underlying case in his law column today.

The Supreme Court declined to comment on its denial of cert, so we have to look to the Fifth Circuit's majority for the governing law. And, when we peel back that majority's seemingly reasonable outer layer, we're left with mind-numbing inanity. The Fifth Circuit has carved out a strange exception to a state's responsibility to recognize out-of-state adoption judgments and it has done so without justification.

Watch Thomas Roberts speak with Adar, AFTER THE JUMP…