Ron Paul spoke to Iowa State's Barry Snell about a variety of topics but offered his opinion about 'DADT' and same-sex marriage: 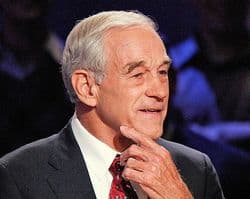 “Well, like I said, everybody has the same rights as everybody else, so homosexuals in the military isn’t a problem. It’s only if they’re doing things they shouldn’t be, if they’re disruptive. But there’s … men and women getting into trouble with each other too. And there’s a lot more heterosexuals in the military, so logically they’re causing more trouble than gays. So yes, you just have the same rules for everybody and treat them all the same.”

He also said that the government should have no say in marriage:

"You know I just, I don't think of people in little groups like that. I don't think of people as ‘gay' here and ‘black people' there, or ‘women' over here…Everybody is an individual person and everybody has the same rights as anyone else. The government has no business in your private life, you know, so if one person is allowed to do something so should everyone else. The whole gay marriage issue is a private affair and the federal government has no say."