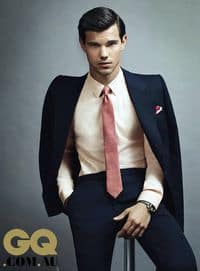 “[My publicist] Liz [Mahoney] says I don’t talk about my personal life,” he told the magazine when asked about a rumoured split from his Abduction costar Lily Collins.

Undeterred, GQ turned their attention to the rumour that the owner of People’s fourth ‘most amazing body’ prefers Team Edward to Team Women — a rumour that began when Lautner was spotted dining with gay Hollywood magnates Gus Van Sant and Dustin Lance Black.

“No, definitely not,” Hollywood’s highest paid teen said when asked whether either Van Sant or Black made a pass. “I think they know I’m straight. But they’re great guys. They’re a lot of fun.” Adding rather blandly: “It’s not a coincidence that there was a writer, a director and an actor at dinner.”

Watch a behind-the-scenes clip of Lautner’s GQ spread, AFTER THE JUMP…

VIDEO: Taylor Lautner Behind the Scenes