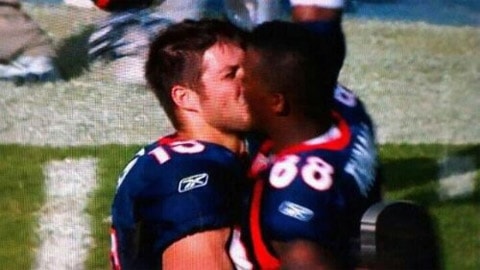 Denver Bronco and Focus on the Family spokesman Tim Tebow planted a wet one on Demaryius Thomas during his late game rescue yesterday against the dolphins. Thomas caught the first of two touchdown passes from Tebow that positioned the Broncos for the win.

It’s not the first time Tebow has shared a special moment like that with another man.

You may recall Tebow had a kiss with University of Florida teammate Tony Joiner that got the college football world talking a few years ago.

It’s doubtful Tebow’s PDA means his Bible-driven views have changed. Presumably as a result of controversy surrounding the 2010 Super Bowl as he made for anti-gay, anti-choice evangelical group Focus on the Family, Tebow is forbidden from talking about same-sex marriage with the press.

Though if he wants to keep making anti-homophobia PSAs like the screen shot above, we’ll keep pointing them out.