Justin Adkins, a transgender activist and Assistant Director of the Multicultural Center at Williams College, was arrested as part of the “Occupy Wall Street” protest on October 1 at the Brooklyn Bridge. 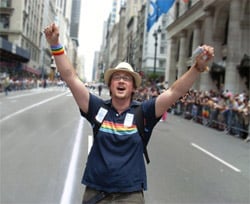 In a statement released to the public (read it below), Adkins details his mistreatment by the NYPD because of the fact that he is a transgender man. Adkins said he identified himself as transgender from the moment he was arrested. That, however, did not prevent a humiliating sequence of events from occurring which included a disrespectful genital pat down, being segregated from others arrested at the protest and being placed in a cell with violent criminals, being chained to the wall of the only working restroom in the jail for 8 hours. Being denied three requests for food while others at the protest were fed a peanut butter and jelly sandwich and water.

At one point the woman (another protester) I had spoken with earlier was brought into use the toilet. When she entered the room she looked shocked and asked why I was attached to the railing. I told her again that it was the “transgender special”. She clearly understood that I was being discriminated against because of my transgender status. She asked the female officer in the room why I couldn’t be given my own cell and the officer said “you don’t know why he is locked up here” the woman said that she did know and that I should at least be given my own cell if they were not going to house me with the male protestors I was originally arrested with.

Throughout the night it became clear that they wanted my fellow protestors to think that I did something criminally wrong. That I had done something different from them. That I was not just a peaceful protestor exercising my rights on that bridge. That I deserved to be handcuffed to a railing in the side of the precinct with violent criminals. Everyone seemed to wonder why I had been separated. When other officers chatted amongst themselves about why I was separated, one officer suspected aloud that I was a “ringleader”. The woman officer stood a few times outside the glass wall with the door open as male officers asked about me. It appeared that she told them that I was transgender as they gawked, giggled and stared at me.

Adkins says he hopes that his story will shine some light on the lack of protocol regarding transgender people by the NYPD: “No one should experience the blatant discrimination and embarrassment that I did.”

Previous Post: « The Ladies of ‘The View’ Wrangle with the N-Word: VIDEO
Next Post: Spineless Mitt Romney Won’t ‘Scold the Audience’ Over Booing of Gay Soldier: VIDEO »