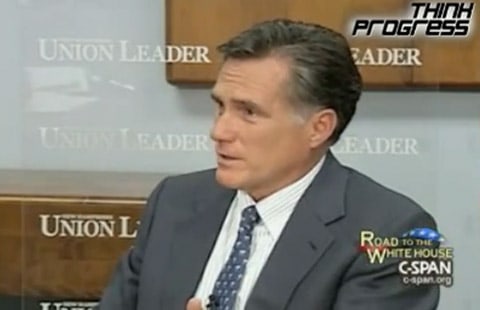 The GOP debate booing of that gay soldier is still resonating. Mitt Romney was asked about it by New Hampshire's Union Leader. He couldn't bring himself to condemn it, Think Progress reports.

“I think we can hear the boos. I would tell you that in these debates there’s been a lot of booing and a lot of applause, cheering and booing — some of which I don’t agree with. Now, I have not made it my practice to scold the audience and say, ‘I disagree with this person, I agree with that person’ because it goes in a lot of different directions. I don’t recall whether this soldier — whether people were booing his question or just…I don’t know when they booed and I don’t know why they booed. But I will tell you, that the boos and applause hasn’t always coincided with my own views, but I haven’t stepped in to try and say, ‘this one is right, this one is wrong.’ Instead, I focus on the things I think I will say.”