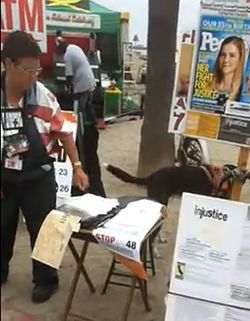 Earlier this week, a gay man caught a volunteer promoting Stop SB 48 – which would repeal the California law requiring gay history to be taught in schools – by saying the conservative measure protects children from molesters.

As such, yesterday, Courage Campaign filed a formal complaint with the California Attorney General, District Attorney, and the Oceanside City Attorney on behalf of Max Disposti, who witnessed the events, requesting an investigation (and possible prosecution) into signature-gathering tactics used by Stop SB 48 volunteers. Alleging that SB 48 could expose children to sexual predators is simply unacceptable, and Stop SB 48 campaign and their volunteers should be held accountable. We’ll keep you informed as this proceeds.

You can read the complaint – and co-sign it – here.