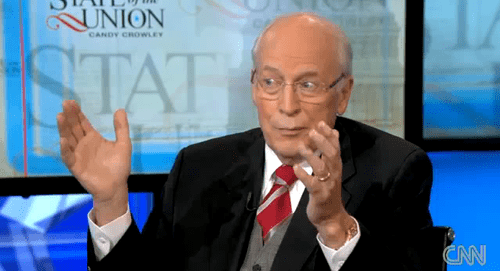 On CNN's State of the Union, Dick Cheney said he's pleased with DADT repeal. Then he got indignant about President Obama's criticism of the booing at the Republican debate.

"I'm not sure that it was all focused on that particular issue," he said of the jeering directed at a gay soldier. Well, Dick, if they weren't booing the gay soldier, what were they booing? I know: what we mistook for booing was actually a guttural cheering.

Then his elder daughter Liz Cheney piled on:

[Obama's] position on these issues hasn't been that different from where many of the Republican candidates are.

Lie. Even moderate Romney supports DADT and signed a far-right NOM pledge, and one of the candidates actually runs an ex-gay clinic!

He hasn't come out and advocated gay marriage, for example. I think this was sort of one more example where he's trying to have it both ways.

Talk about having it both ways, Liz. You and your father stood to the side like bad samaritans while President Bush tried to weasel a marriage amendment into the founding document of this country and fanned homophobia at the polls. Your employer turned gay marriage into a poison pill for Democrats and empowered the movement to make it a constitutional impossibility in dozens of states. If Obama came out in favor of marriage equality, your party would bludgeon him.

When he speaks to that audience he tries to sound like he's, you know, some sort of a fighter and advocate for equality, but when he's trying to appeal to people who may not have that as their primary issue, he has got another position.

I thought it was pretty vintage Obama, frankly.

It's like watching an AWOL soldier berate a Purple Heart winner. You've got to admire the dazzling chutzpah. What's unnerving is that plenty of LGBTs on the left essentially share the Cheneys' sentiment, belittling Obama's accomplishments while ignoring the tremendous danger from the right.