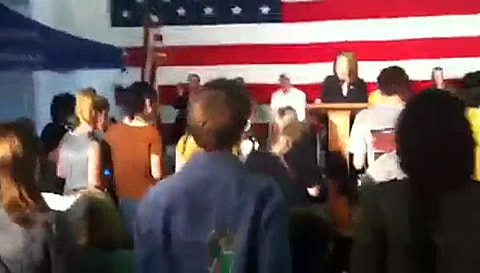 Protesters from "Occupy Charleston" infiltrated and interrupted a Michele Bachmann event today in South Carolina as Bachmann was on stage giving a speech, Patch reports:

Roughly 10 minutes into her speech, in front of roughly 60 supporters and media, the occupy group sitting amongst the crowd stood at their seats at the call from their leader, "Mic check!"

The group then began a call and response message similar to speeches at Occupy rallies throughout the country.

"You capitalize on dividing Americans, claiming people that disagree with you are unpatriotic socialists," they said to Bachmann as local police escorted the candidate from the stage."