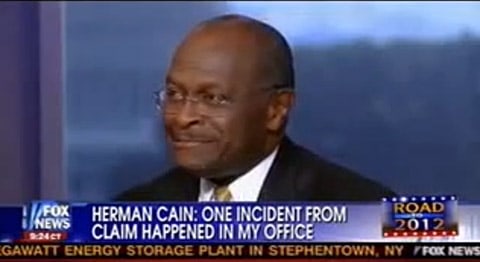 Herman Cain appeared on Greta van Susteren's show last night to follow up on allegations that he sexually harassed two women while head of the National Restaurant Association in the 1990s, and paid them off with packages “in the five-figure range.”

Said Cain, who now sort of recalls one of the incidents:

"I thought I had drawn the line and not infringed upon what was obviously perceived as sexual harassment on her part when I made that gesture about her height. And I can't honestly remember what else was even in the accusation."

Van Susteren asked Cain whether he has a wandering eye:

"I enjoy flowers like everybody else — no, no not at all — well, I wouldn't say not at all, it depends on what you mean."