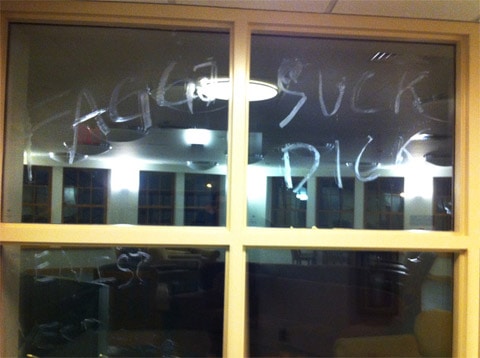 Earlier this month, a vandal tagged an area at Dartmouth College with homophobic graffiti:

The vandalism, which was located adjacent to the gender-neutral floor, has spurred concern in the bisexual, gay, lesbian and transgender community. Gender-neutral hall residents are worried that the incident reveals negative undertones towards LGBT students on campus, various residents said in interviews with The Dartmouth.

The community response has predictably been one of regret. After an initial lag in administrative action and student notification, news of the vandalism inspired many to speak out against such behavior. Campus rhetoric has framed the incident as an isolated occurrence unrepresentative of general community sentiments. This sort of thing doesn’t happen at Dartmouth, apparently. The real problem lies with our current communication channels, or administrative transparency or the transgressions of a single apostate.

The truth is that our problems are more fundamental. Most students would individually recognize that the word “fag” is hateful. But seldom do we function individually, separated from the influences and dynamics of our community and peers. And in certain spheres within our community, it is considered quite acceptable to use the word “fag” or “faggot.”

The use of these slurs is not only acceptable — it’s prevalent. I stopped counting the number of times I’ve heard “faggot” bandied about casually like a comment on the weather. Unsurprisingly, the most frequent site of violation has been the fraternity basement — that fabled locale where reckless indulgence pairs effortlessly with unbridled masculine rage.

Meanwhile, Williams College was hit with a similar hate crime:

Early Saturday morning, a student called into Campus Safety and Security reporting that the phrase  “All N****rs Must Die” was written in a dormitory. Originally described by the administration as a “racially hateful phrase,” the writing of the graffiti has since been filed as a hate crime by the Williamstown Police Department (WPD). Following collaboration with the Faculty Steering Committee (FSC), senior staff and students, President Falk cancelled all classes and athletic practices on Monday. It was the first time in over 30 years that the administration had decided to cancel class in response to a specific act of racial discrimination. On Monday, students, faculty and administrators organized a day of programming to address issues of discrimination, racial and otherwise, in the wake of the hate crime.