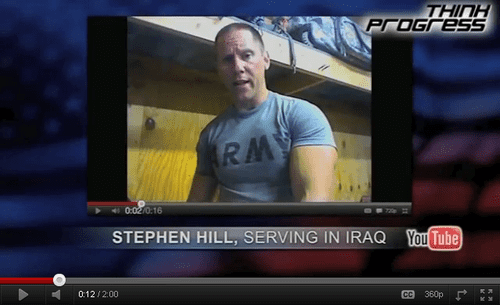 Y'all know Army Captain Stephen Hill as the gay soldier booed by a roomful of patriotic, freedom-loving, troops-worshipping Republicans at the Orlando presidential debate in September. (And if you don't know Capt. Hill at all, see the video AFTER THE JUMP.) Via a pre-recorded video Hill made while deployed in Iraq, Hill asked the candidates:

In 2010 when I was deployed to Iraw, I had to lie about who I was because I'm a gay soldier, and I didn't want to lose my job. My question is: Under one of your presidencies, do you intend to circumvent the progress that's been made for gay and lesbian soldiers in the military?

The booing was immediate and loud. Rick Santorum, who'd been selected by the FOX news moderators to answer the question, later claimed not to hear the heckling. In his response, Santorum made the usual straw man arguments, acting like the repeal of DADT gave soldiers license to practice sodomy in the trenches. "I would say any type of sexual activity has absolutely no place in the military," etc., blah blah blah, to rapturous applause.

Yesterday afternoon, the AP published an interview in which Hill "reflected publicly for the first time on his reasons for submitting the pre-recorded question for the Sept. 22 debate, as well as his reaction to the heckles heard around the world; the answer that former Sen. Rick Santorum gave to thunderous applause; and the outrage expressed on his behalf by, among others, his commander in chief."

"When the actual booing occurred, my gut dropped out, because my first inclination was, did I just do something wrong?" he said. "The answer, obviously, wasn't very supportive of gay people, and there was a lot of fear of how the Army would take the question."

He did not have to wait long to find out. At breakfast later that morning, the segment was playing on the chow hall television. Hill immediately tracked down his commander, who told him she had no problem with what he'd done but that she would need to run it up the chain of command. She later relayed the response.

"She said, 'What the military's most concerned with is that you are OK, because it's a lot of pressure on you and we want to make sure if there is anything we can do to help,'" he recalled.